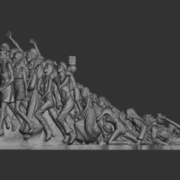 Challenge: To create a scale model of a life-size statue commissioned by the Vatican for raising awareness of human trafficking

Result: The entire statue was scanned over two days and in just three hours. Smaller 65-70cm versions are being 3D printed with every detail intact, one of which will be presented to the Pope. From the original sculpture, ten full-sized statues will be cast in bronze and installed around the world.

They say that all roads lead to Rome. And in one case, a smooth journey from Canada to the Vatican was ensured via the use of 3D scanning. For Canadian sculptor Timothy Schmalz, it was a matter of converting a monumental sculpture – commissioned by the Vatican to raise awareness on human trafficking – into two productions: to turn one original clay sculpture into 10 bronze statues, in true-to-size recreations that will be installed in cities around the world, and smaller versions that will be 3D-printed and sent to hundreds of locations internationally – with one in particular to be presented to the Pope.

“Tim has a workshop here in a small town, a big old giant space full of crazy sculptures everywhere,” says Steve Cory, president of Gold Certified Artec 3D partner Objex Unlimited. “He’s already done several works for the Vatican and for the Pope. You can actually find pictures of him with the previous Pope, and several of his sculptures have been blessed.”

As impressive as Tim’s portfolio is, for the Catholic art specialist, this piece titled “Let the Oppressed Go Free” was different.

“I’ve been sculpting for 30 years,” said Tim, who is also the man behind the famous “Homeless Jesus” statue, which made headlines around the world. “The fascinating thing is that I have spent many a long night working on trying to reproduce my own sculptures.”

With smaller versions of the statue, the art is immediately more accessible – and deliverable – to locations around the world. Thanks to 3D scanning – in this case levelled up Leo with Artec Studio’s HD Mode – the entire 20-foot sculpture was scanned and successfully scaled down for further production complete with details of every figure down to their clothing, accessories, postures, faces, hair, and expressions.

“It’s very powerful to turn the large statue into a smaller size so that more people can see it,” said Tim, adding that the smaller printed versions also serve to promote the larger pieces. “The detail in this printed statue is unbelievable,” said Tim. “But not only the detail, even the human expression to be seen within this small scan. It’s just absolutely unbelievable.”

The statue is made up of about 100 figures – represented in the statue is everyone from a child bride to a child soldier, young victims of sex trafficking, organ trafficking, sex slaves, and more. “Human trafficking is more than one story,” Tim said. “So this sculpture tells the stories of a hundred different faces.”

This, he said, would not have been possible without 3D scanning – the scaled model as you see it now is as real as possible with no details missing.

“Now I see what this technology brings and it’s just absolutely stunning,” says Tim. “There’s no way a human could create this. I could not have created this smaller version myself, and I’m the actual sculptor of the big piece!”

Tim Schmalz and Objex Unlimited first started working together in around 2015. “Since then, I’ve probably scanned 25 or 30 of his sculptures,” said Steve. For this particular work, it was Artec Leo which was called upon – and with HD Mode.

“Tim does a lot of smaller reproductions of his larger works, which he had historically been sculpting by hand,” Steve explained. “For one of the first sculptures I scanned for him, he said it had taken 150 hours to recreate it on a smaller scale – and he was never happy with it.”

“I’ve scanned his stuff with Leo, with Spider, with Eva, with combinations of all of the above, but in this case, Leo and HD Mode really changed everything,” said Steve, who had his sights set on scanning the statue for almost a year.

Being able to create his huge sculpture with Artec Leo and then scale it down has provided several benefits. The process proceeded in no time at all, and the team themselves were impressed with how smoothly it all went.

The 20-foot-long sculpture was scanned in three hours over two days, with an additional two hours to upload all the data, and just 10 hours to put it all together, Steve said. All processing was done in Artec Studio, with ZBrush for a few minor touch-ups.

“Even as I was scanning, he’s constantly wetting these models and making sure that they’re not cracking too much,” Steve recalled. “Being able to get through the scanning quickly helps maintain the integrity of the sculpture itself.”

During this period of time, several of the heads on the sculpture had also been removed, and sculpting work had continued. When the heads were replaced, they were in slightly different positions.

“Some features on the sculpture had been modified so I had to rescan them,” Steve said. “This is where Artec Studio was very helpful in that I could edit areas of some scans and then merge them with others – the real key here was the large field of view of Leo, and the automatic alignment to previous scans.”

With onboard processing and a touch-screen display, Artec Leo features an easy scanning process, with all attention focused on the task at hand, and no laptops and wires getting in the way. When paired with HD Mode, Leo is now AI-powered, capturing and processing data in super-high-resolution color 3D in anywhere from 1X-64X scan density, with every edge and corner reconstructed, and with little to no noise. This industry-first technology indeed proved handy for a task as large and detailed as this one.

“For something this huge I expected we’d spend 10 or 15 hours, but in this case it took very little time,” said Steve. “With HD Mode it was just crazy good. I’m so blown away every time, and we don’t do any scans without it. There’s no point, it’s just so much better.”

And the final result did not disappoint.

“It’s stunningly beautiful, it’s absolutely amazing, and what’s really amazing is that we spent two hours on the digital cleanup in this gigantic massive sculpture,” Steve says. “We had to spend hardly any time on it because the Leo data was just really good.”

As the models, printed on Mimaki 3D printers, start to make their way around the world, the large, bronze-cast statues are in the works, too. In a process of recreating clay to bronze that takes six months per piece, the 10 statues are being made in Tim’s studio in China. The first bronze sculpture will be sent to an organization in Washington D.C.

While traditional mold making is still being used, 3D scanning plays no small part in this process either. “If one of the molds is broken or inaccurate,” Steve explained, “it can be rebuilt using the scans.”

This also greatly helps the quality control process: instead of looking at pictures, a highly detailed and accurate reference is digitally available.

Scans also help the installation process: in this case, a Drawing Exchange Format (DXF) file of the statue’s footprint was sent to architects working on one of the installations to assist in planning measurements for installation. “It’s almost impossible to get something close to accurate by measuring physically,” Steve said.

While the first print of the smaller statue has already made its way to Rome, the presentation of the statue to the Pope has been put on hold indefinitely due to social distancing rules in the Vatican. For now, though, there is still much work remaining to be done for getting this sculpture out as extensively as possible.

“[As an artist] I am completely thankful for this ‘little’ scan that has brought a 20-ft sculpture – which is very hard to move – to a smaller scale,” said Tim, who hopes to spread this message as widely as possible through his art.

“Pope Francis said that human trafficking will always exist, if it’s kept underground,” says Tim. “And this sculpture, and the small replica, brings awareness and it brings it out from under the ground.”