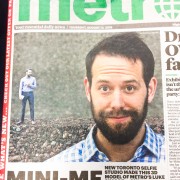 Yesterday, Objex Unlimited sister company Sculptraits was featured on the front page of Metro News Toronto. Founder of Objex Unlimited and Sculptraits, Steve Cory, spoke about the 3D Printed selfies, called Selftraits. In particular, Steve talked about the Projex Selfie Day promotion where customers can receive 10% off the 5″ Selftrait, and 20% off the 6″ Selftrait. In accordance to the Projex Selfie initiative, proceeds will be donated to the Paralympic Committee; an organization dedicated to strengthening the Paralympic movement.

“A Toronto company is taking selfies to the next dimension.

Sculptraits Studios will create a 3D model of you and turn it into a six-inch, full-colour figurine for $120.
“It began as a proof of concept. Could we scan and print a person?” said Steve Cory, Sculptraits founder and president of its parent company, Objex Unlimited.

Turns out, you can.

While other 3D selfie providers rely on handheld scanners or moving cameras, Sculptraits Studios (321 Davenport Rd.) opened in July boasting a booth equipped with more than 130 synchronized cameras. Not only does the technique allow Cory and his colleagues to capture subjects in motion, it also results in a surprisingly lifelike figurines….”