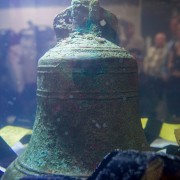 Last week, the ROM announced their new exhibit outlining Sir John Franklin’s lost 1845 expedition to find passage in the Arctic Northwest. The centrepiece of the exhibit? A full-scale, 3D printed replica of the bell that once rung aboard the HMS Erebus.

The replica of John Franklin’s bell was created using an Artec Eva 3D Scanner and a 3D Systems ProJet 660Pro. First, the 3D scan was actually done underwater to ensure that the bell kept it’s original shape and was not damaged during the extraction. The Artec Eva has the advantage of being one of the most flexible scanners on the market today, and has the ability to capture both colour and geometry simultaneously. Second, the replica was printed on a ProJet 660Pro, 3D Systems’ full colour printer (and one we use every day here at Objex Unlimited), due to its amazing colour reproduction and photo realistic printing abilities. When it comes to realism, there really is no other 3D Printer that can reproduce colours like the 3D Systems x60 Series.
[hs_action id=”6496″]
From the National Post: “The bell that was recovered from the ship requires extensive conservation and so the creation of a full-size 3D replica — the only one in the world — seems to us to be a great way to launch this project,” said Janet Carding, the museum’s director and CEO.”
There are certainly no shortage of examples where 3D scanning and 3D printing have been used in conjunction to restore historically significant items and artifacts that would otherwise be too fragile or delicate for public display. Every day, more and more museums are turning to 3D printing as a means to create perfect replicas of existing artifacts, or restoring artifacts that have already been damaged.
December 29, 2014
https://objexunlimited.com/objexunlimited/wp-content/uploads/2014/12/image.jpg 540 960 Objex Unlimited https://objexunlimited.com/objexunlimited/wp-content/uploads/2017/11/OBJEX_LOGO_WHITE_17-copy-300x153.png Objex Unlimited2014-12-29 17:14:372016-07-14 17:21:433D Printed HMS Erebus bell replica, scanned using Artec Eva, to be centrepiece of Franklin Expedition exhibit
0 replies