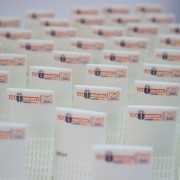 Originally published on 3dPrint.com by EDDIE KRASSENSTEIN on November 19, 2014. You can view the original article here.

With 3D printing comes the ability to create custom products in a very short amount of time. This is why some people believe that the technology will ultimately lead to a mass customization aspect within the manufacturing and design space. In the past, we have seen awards and trophies created through the use of 3D printing, quite simply because of this very customization aspect that the technology provides. No one wants a generic trophy that looks the same as every other award they have received, and more importantly companies don’t want to spend months or even years designing, developing, and manufacturing these awards.

Recently, a company called NUUMstudio was contacted by a publishing company asking if they could help in the creation of some very special trophies.

NUUMstudio is a small creative studio, founded by two architects, named Wojciech Hydzik and Claudia Barros Alves. Based in Funchal, a town on the Portuguese Island of Madeira, they recently just got into the business of 3D printing, aiming to produce and sell their own products via their son-to-be-released web shop, NUUMshop.

“We were approached by the local newspaper, ‘Diario de Noticias’ to design and print the awards for an upcoming award ceremony (100 Maiores e Melhores Empressas) that focuses on the success of the 100 biggest and best companies of Madeira,” Wojciech Hydzik tells 3DPrint.com. “This also happened to be the 25th anniversary of this event, with the Portuguese Prime Minister Dr. Pedro Passos Coelho invited as [a] guest speaker. We didn’t have the printer yet, but took the job knowing that when the printer arrive[d] we’ll basically have to start printing immediately to make it in time.”

Using their design ability, which they learned from being architects in London for approximately 6 years, the team created the renderings of the trophies and then 3D printed them on their newly acquired 3D Systems Projet 4500.

“We bought the Projet 4500 by 3D Systems, mainly due to its huge possibilities in full continuous colour printing in a durable and semi flexible plastic – since we wanted to create usable parts as well as prototypes and models,” Hydzik tells us. “It’s a relatively new model from 3D Systems, and was the first of its kind installed in Portugal.”

As for the trophies themselves, as seen in the photos in this article, they came out quite astonishing. They certainly are unique in every sense of the word. Hydzik says that the structure was designed to reflect the importance of the event, marked by its 25th anniversary as well as display the idea of successful business growth. “The form derives from 25 solid foundations that climb and twist, then begin to network between each other giving a new dimension and tensegrity that is found in truly successful businesses,” he explains. “We also wanted to explore the materiality of the structures, so the foundations are a very solid form, and when it climbs and forms a new type of structure, it’s equally solid but has a degree of flexibilty in it. Being architects, we also have interests in skyscrapers and how they represent the success of modern day business.”

Now that this project has been complete, the team at NUUMstudio is focusing on designing their own 3D printed products, which they plan to sell both online and through several different retail shops. Their products will range from household items to personal accessories such as phone cases, jewelry, and more. They are also in discussions with local hotels in order to design personalized architectural models.

What do you think about these incredibly unique 3D printed trophies? Discuss in the 3D Printed Portuguese Trophies forum thread on 3DPB.com.