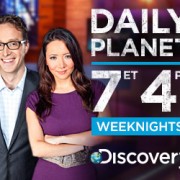 UPDATE December 11, 2014: Thank you for tuning in! Sculptraits Studios on Daily Planet was a HUGE success. For those who may have missed it, here is a sneak preview of the segment. Keep checking back, we will be posting a video of the full segment shortly, including the unveiling of the 3D Prints to Lucas. You won’t want to miss it!

Tune in to Daily Planet on Wednesday, December 10th to see the unveiling of Sculptraits Studios, the state-of-the-art, professional 3D scanning studio located in Toronto. Join Daily Planet’s Tech Correspondent, Lucas Cochran, as he gets the full Sculptraits experience; this includes an extremely high-detail 3D Body Scan, 3D Design/Manipulation of the 3D Scan, and finishing up with a picture-perfect 3D Printed model. We hope you enjoy watching the segment as much as we enjoyed filming it!
Daily Planet airs on Discovery Channel Canada, Monday through Friday at 7 p.m. EST (Monday through Friday at 4 p.m. PST). For those who don’t know, Daily Planet is a television program on Discovery Channel Canada which features daily news, discussion and commentary on the scientific aspects of current events and discoveries.
As a sister company of Objex Unlimited, Sculptraits Studios encompasses all the facets that fall under high-end 3D capture services, utilizing our proprietary, cutting-edge 3D scanning technologies. Going above and beyond the trend of “3D Selfies,” Sculptraits Studios focuses on large-scale, highly-detailed, professional 3D Services. This includes 3D Scanning, 3D Design, and 3D Effects. The aim of Sculptraits is to empower people with opportunities to Capture, Create and Archive high-quality, timeless digital assets. Sculptraits is located at 321 Davenport Rd. in Toronto, and is now taking appointments.
www.discovery.ca/dailyplanet
December 10, 2014
https://objexunlimited.com/objexunlimited/wp-content/uploads/2014/12/DailyPlanet_webbanner.jpg 250 300 Objex Unlimited https://objexunlimited.com/objexunlimited/wp-content/uploads/2017/11/OBJEX_LOGO_WHITE_17-copy-300x153.png Objex Unlimited2014-12-10 15:59:142015-02-23 12:47:51Sculptraits Studios to be featured on Daily Planet!
0 replies

Looking back at the 2014 Humber Thesis Show
Scroll to top